skip to main | skip to sidebar

Day 4 - We started our day right off of the ferry, and up the hill. It was the longest day of climbing in my life. We rode for 68km and at least 30k mof that was uphill. Needless to say, now Phil understands why I said that the last time I had done it with Kat there had been some walking.
I won't go into the boring details of the fatigue, and handing food over to my friend Janice who was bonking. I think there were many people bonking. Unfortunately for me, I think now going on 3 days of pushing mud had it's toll on me and I strained my knee and couldn't put any pressure on it. It was sending searing pains through my leg when I did, so i ended up using my other leg for most of the pushing.

Once again the downhill sections were lots of fun. We got in in 6 hours 45 min. My friend Cindy had had a mechanical and wasn't in in time to make her massage apt, so I kindly took it for her. I think it helped my knee some. Then it was a  rush to get the bikes cleaned, feed ourselves, wash ourselves and get ourselves to bed, to do it again the next day.

Day 5. - more climbing. I'm really starting to feel tired now. It was a shorter day, only 4 hours. Lots of climbing again, but we were rewarded with a great downhill to the ferry and a sunny day.
Phil and i found a river to soak our legs in while waiting for the ferry, a great recovery formula. I have to add, the other great part of finishing the race, or even getting to a well earned aid station, is that they have froot loops!!
Posted by Julie Melanson at 6:38 PM No comments:

The locals are friendly and so are the Sasquatch

I was impressed in both Campbell River and Powell River at the locals that came out to watch the start of the race, in the rain.

I give a shout out to all the volunteers in this race. in Campbell River alone it took 72 volunteers to organize the course.

"Slurp" - that's the sound of the Campbell River day. It was so muddy that it was a slog to get through. I love the trails in Campbell River, they are rooty and loamy. I was a bit nervous at the start of the day, as I had raced in the area before when it was wet and it was so slippery I was afraid I would hurt myself. Well, today I didn't have to worry. The mud filled in the gaps and made it slurpy rather than slippery.


Many racers on the trail were surprised by the Saquatch on the trail, but I was happy to see under the mask it was a friendly face of Brent Martin of Ryders Eyeware, giving riders a boost up the hill.

My race partner Phil was a Champion, pulling me up the hill at the start, and again at the end of the day into the headwind along the road into the finish. It was a long day, but good.


I found my favorite downhill ever in Powell River, Day 3. In this race, there are timed sections of downhill, like mini races in the race.

Posted by Julie Melanson at 6:37 PM No comments:

I was a bit cheeky at the start. Our plan was to not go hard. First day of 7 days of racing; best to pace ourselves, but when I saw the opening, I couldn't resist.

We were standing on the sidewalk at the start line, waiting to work our way back to our 'time category' start area. Group 1 left and there was nothing between us and the start. Nothing stopping us from jumping in behind the pack, so I turned to Phil and said "Let's go."

Silly idea, hanging on to the back of the first pack I was immediately in my lactate zone (with a high heart rate) and stayed there for most of the day.

It was a great day of riding. I love riding Cumberland, and even more so now that I know the trails and what to expect. There was an uphill climb - worth it for the downhill. I try to ride the DH clean (meaning making it down without crashing or having to get off my bike  - riding smart.) At one point riding down a rock face an impatient guy took the good line to the right, but I managed to hold on to the middle line. When I finished the DH section a guy riding two riders back said to the "You're a wicked rider." He made my day, my week, maybe my year.

When the motorcyclist later followed my through a flat bumpy section, and I rode a bit smarter and a bit faster to try to not hold him up, he told me I was an awesome rider. I as on such a high after that. What a great race that people can compliment others. I feel it's because they are surprised a girl can ride the sections that I do. I know so many female riders that are better than myself, and inspire me. I only hope that I can pass some of this on to others as well.

and now for tomorrow. I have a feeling it's going to really hurt.
Posted by Julie Melanson at 6:14 PM No comments:

As athletes, there are so many reasons that can prevent us from racing, such as illness or injury. When we've done the preparation, the bike is in working order, the body is ready, it's really devastating to hear the words from the officials mouth that tell you you won't be on the start line that day.

As tempted as I was to go and mope, I knew that I should put it aside for the moment and support Simon as he raced in the men's race. Being on the side line allowed me to watch some amazing Canadian riders in action.

For the national championships, the women's start list seemed small to me. With a start line of 16 riders, only the best had shown up.

The women's race started at such a fast pace that a part of me wondered if I could have kept up. Catharine Pendrel took the lead effortlessly as the strong rider she is. Check out Catherine's blog for her story of the race.

The men's race might have been another story, with so many strong men in the field to challenge our world cup racer, Geoff Kabush. The leaders stayed close together until about lap 3 (if I remember right) when Geoff demonstrated what power is. He came through the start/finish area and I watched as he changed his position slightly and just turned the power on, and pulled away from everyone a pedal stroke at a time. It was amazing to watch. 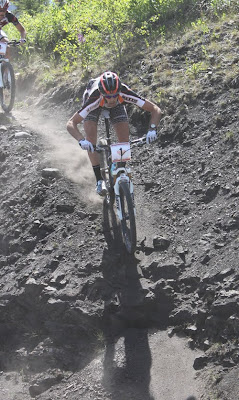 Posted by Julie Melanson at 3:45 PM No comments:

Photo highlights from the BC Bike Race 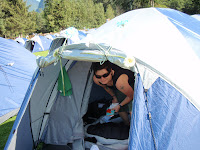 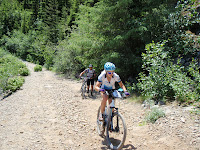 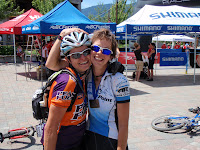 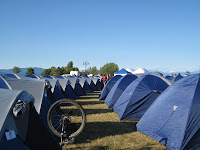 Posted by Julie Melanson at 10:19 PM No comments: 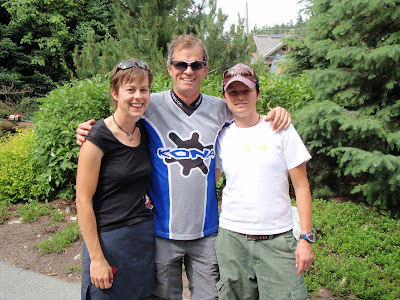 Brent Martin was the real winner of the BC Bike Race. After starting Day 1 sick with the flu - or food poisoning. He completed the course, went home to bed and started Day 2 on his bike.....half way through Brent got the energy liquid that many of us tried to fake heatstroke symptoms in hope of getting hooked up.
Many IV's later he was back on his bike for Day 3.
By Day 4, so Kat and I were pleasantly surprised to see his smiling face on the start line...without a bike, taking photos. He decided to take a rest day.....but was back on the bike for day 6.
Posted by Julie Melanson at 10:11 PM No comments:

Lines from the BC Bike Race

"You know the funny thing..." (Funny was omitted from our allowed words by day 5) 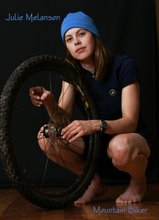